Wendy Tomes has been a beneficiary of the Thalidomide Trust since it was set up.

The eldest of six children, she grew up in Kenilworth, Warwickshire, before moving to Worcester when she met and married her husband, in the 80s.

When back and sight problems led to Wendy’s retirement from Banking in 2005 she gradually became more involved with volunteering and has been involved ever since:-
“When I retired I wanted to keep busy,” Wendy explains “I didn’t want to sit on my bum and meditate. I wanted to help people!”

Since retirement Wendy has volunteered for several organisations

She did some campaigning for the Royal National Institute for the Blind (RNIB) and also helped out with fundraising at her local Sight Centre, counting the donations from street collections.

“I then got involved with reaching out to other beneficiaries of the Trust,” she tells us. “Someone I knew asked me if I’d support another beneficiary living in Worcester, about eight miles away.

“I started visiting him in the Day Centre where he goes, primarily to get him more interested in computers; but I discovered that he loves to go out so my husband and I got into a routine of taking him out once a week. This has now become once a month as he’s not in good health and time does not always allow a weekly outing. It’s great to see how much he has picked up as a result of getting out – it really seems to make a difference.

I also visit another man in the West Midlands area who was very down following a bereavement.

Neither of the gentlemen I visit can speak; they express themselves through Makaton and other non-verbal ways; we might communicate in different ways, but we enjoy each other’s company.”

Volunteering is a great way to connect with others

Wendy really enjoys volunteering her time. “I want to do what I can to give people a better quality of life – and it keeps me busy,” she explains “it’s a good way to connect with other beneficiaries.”

Wendy’s dedication to volunteering was rewarded in 2017, when the Trust nominated her for a League of Mercy award.

“The League’s committee chose me to receive the award and I was invited to a ceremony in London at the Lord Mayor’s Parlour. I was accompanied by Katy from the Trust and my husband who were greatly amused at how nervous I was,” Wendy laughs.

“I got my award and then wobbled off the stage,” she adds “ The person making the award had to grab my hand as they could see my knees were going!”

Despite the nerves, Wendy had a very happy and memorable day. She would definitely encourage other beneficiaries to volunteer – “It really makes a difference” she says. 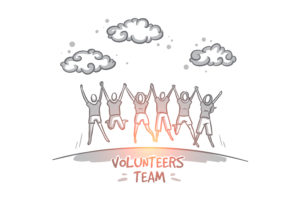