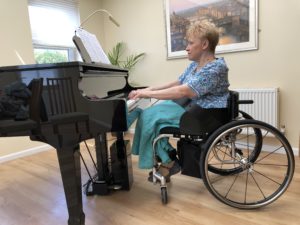 Sally has always had a love and life of music, both playing piano and writing

When something is important to you, you can’t let anything stand in your way; Sally Stevens is testament to that.

Unable to use her legs because of thalidomide, Sally’s parents encouraged her to do the things she could enjoy and introduced her to music at an early age, with a Bontempi organ in her front living room.

She was soon enjoying playing music, moving on from the tunes she could play on the Bontempi to the graded music that came as part of playing the piano.

“Playing and listening to music gave me an outlet when I couldn’t go out and play with the other kids.” She remembers; “I loved writing stories and little plays and swore that one day I would be a writer. Music and writing made me happy.”

But then the fun stopped.

Not having the use of her legs meant that Sally couldn’t work piano pedals, a crucial part of getting her grades, and she stopped playing in her teens, feeling decidedly fed up.

Sally regained her love of music and musical theatre

As time went on music pulled her back, and in her 20s she tried again, falling back in love with music – and with musical theatre in particular. She persevered with her piano grades and completed a degree in English Literature and Religious Studies at Christchurch College, Canterbury. After she met her husband Phil, she moved to Swindon. There she continued to indulge her love of music, culture and the arts.

“I’ve had my own piano for a long time and now have an electronic Roland baby grand.” She explains. “When the old pedal problem was stopping me progressing I contacted disabled groups to see if there was anyone they knew who could build something to help me work them properly. Sadly I found a company that wrecked my piano back then, and had to threaten court action to get my money back. Then I found someone who has built a simple compressor mechanism that I can work with my feet, inside my prosthetic legs, to work the pedals. It took a lot of perseverance but I didn’t give up.” 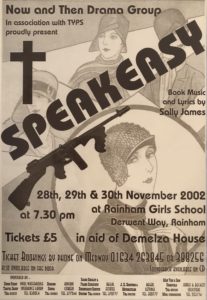 Sally’s musical journey has culminated in her writing two musicals; -
“My first one, Speakeasy, was based on the life of Aimee Semple McPherson, an American evangelist” she says. “I had it recorded and performed by local secondary school children in the Medway Towns in Kent, funding it myself. It had good reviews and it was amazing to hear something I had written performed. It came about from the frustration I felt at not being able to get out after an operation on my leg. I stayed at home and suddenly all these songs just came to me; even though I’d never written songs before.”

Since then Sally has carried on writing musicals and her second, Remember, is in its first full draft and being refined at the time of writing.

It deals with the themes of dementia, the second world war and abuse and discrimination in the care system – startling subjects for a musical but powerful and based on Sally’s own experiences: -
“My late mother lived to be 100 and, although suffering from dementia, was adamant that she didn’t want to go into a care home. My husband and I paid for carers, allowing her to stay at home, despite having constant battles with siblings who were desperate to get her into a home.

I wanted to show through the musical that people with dementia do have something worthwhile to say and like us all have a history and that history is worth exploring. For without history how can we improve ourselves? We can only do this by remembering.”

Friends and family are helping to get Sally's music noticed

As Sally’s musical gets its final tweaks she has the added bonus of having a friend who has been helping her with graded music, and has also arranged the music for Remember. Although now at University, she wants to help Sally have it recorded. She is pulling together her university friends, as part of her course, to play the music and sing the parts. Sally is overjoyed.

“Stella is a great friend, and at only 19 has an incredibly musically mature head on her shoulders,” says Sally. “Phil is going to put some of my past recordings on Spotify and in the cloud in the hope that they will come to people’s notice and attract attention.”

Listen to her friend Josh’s rendition of Moments, a moving song from the musical

“Of course I’d love to get it put on in the West End, with Alfie Boe and Michael Ball recording all the songs, but I know how hard it is to get your work in front of the top people”, Sally says. “For now, it’s enough to hear my songs recorded and to be able to talk about my work. When I play my music everything else disappears, and when I hit the right notes, I feel like I’ve won a million pounds, or been given the key to something really special. I may be in a wheelchair, but music sets me free.”

A story of love, war and how anyone can be a hero

90-year-old Lizzie, who has early stage dementia, is placed in a care home by her unloving daughter. Whilst she is there, Lizzie unexpectedly bumps into Frank, an old work colleague who she hasn’t seen for 70 years.

She remembers working with Frank on the trains during wartime, but Frank ignores Lizzie as he is embarrassed being a stoker, when he had always hoped to be a wartime hero, like Lizzie’s husband Norman, who was evacuated from Dunkirk. Frank even told people he was a sergeant during the conflict.

Now, in his 90s, Frank is still jealous of Lizzie’s dead husband Norman as he will always be Lizzie’s hero – a role Frank would like to take over.

Despite her developing dementia, Lizzie is very aware of the abuse going on in the care home and also the inner turmoil that Frank is going through, so she tells Frank to face up to past lies and jealousies and be the hero he has always yearned to be.

Feeling stronger, Frank has the courage to tackle the abuse in the care home, by having the owners arrested, and to admit his love for Lizzie by asking her to marry him.