Andrew Paddison and his team have recently completed the North Coast 500 challenge, despite Covid-19

Following the success of his 1000 mile cycle last year, Andrew had intended to do another cycle challenge in Ireland this year but this had to be postponed due to Covid-19. Not wanting to be deterred, nor let all his training go to waste, he found another tough challenge to take on.

"This year due to Covid-19, my challenge had to be changed at the last minute. I had to find another recognised cycling route which was going to be tough. The North Coast 500 is well known for its challenges, weather and terrain.

To add to the severity the 500 miles, which includes climbing the equivalent of Everest, were to be covered in 6 days!

On a September Sunday, with heavy rain weather warning, the Team (myself and 5 other cyclists) set off from Inverness Castle and headed due west into the teeth of the storm.

67 miles later we arrived like drowned rats into Loch Carron. Unknown to us, the entire 67 miles had been accompanied by 40mph wind gusts.

I would say this was the most rewarding day of the trip. It tests your mental resolve, the Team spirit and whether you're physically ready. There was not one cross word, smiling is the best way to overcome adversity. And to be honest, those were the worst cycling conditions I have ever encountered, but we arrived safe and strong, although wet. The trip could only get better.

The challenge takes you along the coastal route north, where each climb's pains are soothed by the views which greet you.  The only other difficult stretch was 20 miles of a bone shaker of a road. People pay good money to have pulsing electrodes....we had it for free!

I undertook the challenge on my new customised handbike, which was brilliant. The bike has a foot brake, semi auto gear changes and a torque sensor.

The Team were great, well organised and tremendous company. 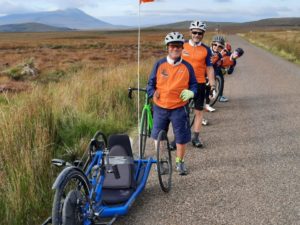 Team Paddison raised money for charity during their challenge

I decided this year to raise money for SafeLives, a charity which aims to end domestic abuse. Our suffering is nothing compared to those subject to abuse. The Team agreed to push ourselves physically and mentally, whereas those who suffer don't ask for such abuse."

For more information and to see videos of the ride from each day, visit Andrew's Facebook page.