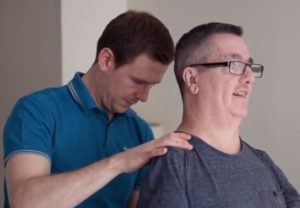 Like most of you reading, David has been affected by thalidomide. For him, this has resulted in a shortened left leg and significantly shortened arms.

Up until 3 years ago, David was feeling well and had no major concerns about pain, balance or falls.

He started having back pain around 3 years ago although he had never injured his back.  After suffering the pain gradually getting worse over a few months  David went to his GP for advice. Unfortunately, he was told that ‘it’s just wear and tear’ and that there is ‘not much that can be done about it’. He was, understandably, upset and believed that there was nothing that he could do to help his pain, other than take pain killers, and he just had to live with it.

As his back pain increased, David's balance and confidence were affected

Over the next few years, David’s pain gradually worsened and started affecting other areas of his life. He stopped going out as much because of the pain and was losing his confidence to go out and do activities he would normally enjoy. Because of this he started having problems with his balance and general fitness. As his back pain got worse, David was increasingly worried he might fall.

Ultimately, David did have a fall. He was walking around his house as usual when his left leg gave way. He landed on his back and had a very difficult job of getting up off the floor. Thankfully, he was not physically injured, however, the fear of falling and the fear of not being able to help himself get back up has stayed with him.

David began to focus on what he could do to help himself and got in touch with a Medical Advisor at the Trust in 2017.

He was put in touch with Fraser Simpson, a physiotherapist who specialises in working with adults who have problems with balance and falls. Over the course of a few months Fraser and David worked together to tackle his back pain first. When that was better they moved onto improving David's balance, walking, ability on the stairs and preventing falls.

After an initial assessment they set out David's goals for the treatment: 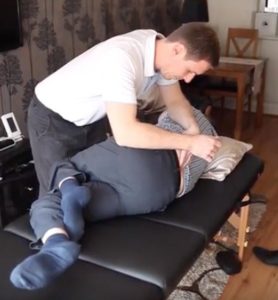 The initial assessment identified that David's shortened leg was affecting the way he moved and was putting a lot of pressure on his back. Along with the Trust, Fraser organised an Orthotist to make a custom insole for David to improve his posture and reduce this pressure.

Then Fraser used manual therapy techniques and posture re-education exercises reduce David's back pain which he responded to very well.

Next they worked on an exercise programme for David to do himself which strengthened his leg and improved his balance, giving him the confidence of moving and going out without the fear of falling.

As the sessions were coming to an end, the Trust found a Pilates instructor who has experience of working with people who have physical difficulties. David now attends 1 to 1 sessions with them and is enjoying the exercise which helps keep him going.

Fraser says, "David has been a terrific person to work with and has made brilliant improvements through his own hard work and determination to not let his pain, balance problems and fears get him down."