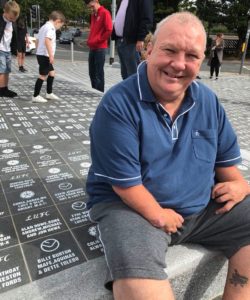 Getting over surgery is a difficult business for anyone. The anaesthetic takes it out of you, there’s physio and rehabilitation to think about, and you still have to cope with everyday tasks like washing and dressing.

It’s hard enough when you live with someone else, but if you have to manage on your own it’s a whole new ball game.

Billy Burton is no stranger to surgery, having had a shoulder replacement. He also lives on his own, some of the time.

With the shoulder op, he had support from his partner during his recovery; but when he went for knee replacement surgery he decided not to accept her offer of travelling to the UK from the Philippines to look after him. Instead, Billy decided to see how he could cope, with local support, as a single man living alone, and he’s keen to share his experience with other beneficiaries: -

“After living with lower back pain, knee replacement surgery seemed the best solution,” Billy explains, “I had two consultations with my surgeon, Mr Donaldson, at the Diagnostic Centre at Spire Bushey Hospital. It’s a great new addition to the hospital, offering a modern, calming and safe environment for consultations, only two miles away from the Royal National Orthopaedic Hospital (RNOH) in Stanmore, where my surgery would take place.

My knee gave way in the street on my way to my appointment and I turned up with cuts and grazes – but the staff patched me up before I saw the consultant. Mr Donaldson is a very likeable young doctor, easy to deal with and very good at his job, so I knew I was in safe hands.

On the day of my operation I was admitted to the RNOH’s Duke of Gloucester Ward (known affectionately as Dog Ward). It hasn’t been open long and is very smart, clean and modern.

I was taken down to theatre and the whole team was very considerate and kept me relaxed until it was time to sedate me.

Knee surgery is traumatic. Your thigh and shin bones are shaved down and fitted with metal plates, so that a plastic knee cap can be fitted – so there’s quite a bit of bruising.

Billy needed some time to recuperate and have physiotherapy in hospital

After surgery I was taken to the high dependency unit (HDU) so my breathing and oxygen levels could be monitored until they returned to normal. I have sleep apnoea which can affect them quite dramatically. The predicted 24 hour stay in HDU turned into 48 hours as the oxygen levels in my blood were a bit too low; but the round-the-clock, one to one care was excellent.

Having short arms makes me feel like an upside down turtle when I’m lying down – and this increased 100 fold when I couldn’t move my leg, either. I spent a lot of time drinking water and then asking for the urine bottle!”

After two days Billy was deemed fit enough to return to Dog Ward and was confined to bed, feeling the urge to pee all the time;

“I had a buzzer to call the nurse whenever I needed painkillers or the urine bottle, but everyone was very busy, which could be quite frustrating,” he explains. “As well as this, a large proportion of staff were non-English speakers, and understanding their accents, or dealing with an obvious language barrier was difficult. Having to repeat myself several times, or have things repeated to me was infuriating and added to the overall discomfort of recovering from an operation. It’s important to be prepared for this.

Hospital food wasn’t great – a bit like school dinners – but you could have takeaways brought in. Woo hoo!”

After a day on the ward RNOH’s occupational therapists and physiotherapists took over Billy’s care and had him up and walking about in no time.

“They were all very young but very knowledgeable about the human body,” Billy comments. “They have a 12 point programme of goals to achieve – such as walking with an aid, walking without an aid, stretching the muscles behind and above the knee, and being able to walk up and down steps. Once they were happy that I could attain all the goals they were happy to discharge me. They gave me exercises to do at home and advised my local authority about the kind of care and support I would need.”

Choosing the right option to recuperate out of hospital

Being a sensible chap, Billy realised that his local authority would not be able to offer him 24 hour care at home. He knew he wouldn’t be able to manage ‘home alone’ so booked himself into a respite home for a week to get help with the basics, before he returned home.

“Being in a private respite home was so, so.” Billy reflects “but it got me to where I needed to be – so was necessary and worthwhile.

Since my slightly delayed return home, social services have been great. They started by coming in two or three times a day to help me with showering and cooking, focussing on re-enabling me to do things independently. I currently need only one visit a day and think I’ll be fully independent again in a couple of weeks.”

“The trauma around the wound is still painful,” he acknowledges “but my limp and hip pains have disappeared. I’m walking upright and straight for the first time in years; how good is that?!”