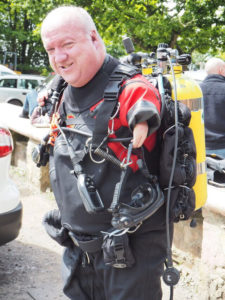 Nick Carapanagiotu has an interesting life.

Hailing from Southport, where he lives with his wife Elaine and 14 year old grandson, he also shares his home with 16 pugs.

The first, Blitzen, was a Christmas present for Elaine and it ‘kind of grew from there’ as Nick puts it. He has rescue dogs, unplanned litters and purchased dogs making up his doggy family.

Retiring from his job as a school IT technician some years ago gave Nick more time to hang out with his pugs. You’d think that they were his main passion in life, but no; his real love is Scuba Diving, something he’s been doing for over 20 years.

“I first tried Scuba diving at Haighmoor House, a hotel owned by the Trust, in Jersey, many years ago. The manager had some scuba kit and asked if we wanted to try it out, in the pool. I loved it!” says Nick.

“I was married with two children then and couldn’t really afford the time or the money to take it up,” he explains. “But when I got divorced in 1998 I needed something to distract me so I decided to give it another go.

I made some enquiries and found out there was a BSAC (Britsh Sub Aqua Club) club in Southport. I got in touch with the Chairman and he was all for it, and took me down to the club to meet everyone.”

Having short arms didn’t stop Nick getting into diving; “I wouldn’t say I was a natural, but I took to it easily,” he says. “Some of the training had to be slightly adapted, and it took me a bit longer to get my qualifications, but I’ve never looked back.”

Starting with training dives in local quarries, Nick has worked his way through the BSAC qualifications (Ocean diver; Sports diver; dive leader; advanced diver) to become an Advanced Diver. The only qualification to go is First Class Diver which he is starting this year, once he’s got two lifesaver qualifications (life saver and advanced life saver) under his belt.

“I’m already an instructor and diving officer for the club,” says Nick “so diving takes up a lot of my life, poor Elaine is a diving widow. She’d love to have a go but problems with her chest have stopped her; but she’s happy for me to do it.”

Diving on wrecks is like going back in time

Nick has certainly done some amazing dives. In England the club has dived all along the coast – including Scotland, Liverpool Bay, Tynemouth, the Orkneys and the East Coast.

He loves diving on wrecks, especially those from World War Two and has ticked off some amazing destinations: Singapore, New Zealand, The Philippines, The Red Sea, Truk Island in Micronesia and the Maldives.

“In England, people have taken things from the wrecks off our shores,” he comments, “but you’re not allowed to do that overseas. Some of the boats are still intact, with everything in them. It’s like going back in time.” 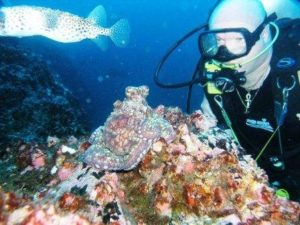 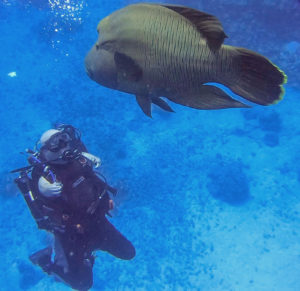 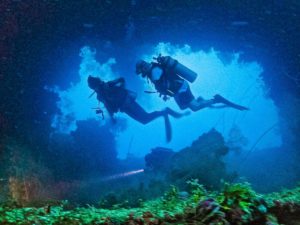 "If I don’t dive for a while I get withdrawal symptoms!”

Just lately Nick has had a break from diving. Unable to wear gloves, he finds that his hands get too cold, but he’s raring to go and is off to the Philippines again in February.

“Diving has improved my health and fitness no end,” he says “and if I don’t dive for a while I get withdrawal symptoms!”

Fancy a go at diving yourself?