Feeling the fear and doing it anyway....

Over the years, I always said that if I had the time I would go to an exercise class. I have always wanted to be fitter, and admired many of those near and dear to me who enjoy exercise that involved group training of some sort. My mother was a dancer, sister – a personal trainer, daughter – an athlete, husband…..well he is convinced darts kept him fit! I always made the excuses that I had too much to do, or that just walking my dog was enough to keep me fit, when if truth be told, I actually was more concerned about exercising in front of other people.

I've tried taster sessions of aerobics, and made myself go swimming, but I didn’t like feeling that I had to hide at the back of the class as I had to do things differently from others, and anyway, who wants to get wet in winter and spend time persuading a friend / family member to come with me to the pool to help me change?

I also experimented with exercising on my own using videos or exercises given to me by physiotherapists following my varied muscular-skeletal issues (hip replacement, problem knees etc.). I would be able to keep up the exercise for a couple of weeks, but then frequency dropped off and it was easy to make excuses about doing them “later” or another day.

Fit For The Future event provided inspiration to do Pilates

I took early retirement in May 2017, and even then, with more time for myself, I couldn’t face committing myself to sessions at particular times, on specific days – at work my life had been ruled by my diary so I needed time just to let things happen. In fact, it was the second Fit for the Future weekend that “happened”. Although I had helped out at the first event, it was the second where I realised the only way I was going to take more regular exercise was by committing myself to specific activities. My poor old pooch, Max, a very springy springer spaniel, had also passed away, so my dog walking excuse, was no longer valid.

I was really inspired by the Pilates taster session (30 minutes on focusing on posture and gentle movement, had relieved a stiff neck), so when a friend of mine mentioned a “rehabilitative” Pilates class she had started attending (for a knee problem), I decided to investigate.

The class was run by Alison, at that time a practising physiotherapist, and before being accepted as a participant I had to attend an assessment session during which a brief case history of my health and health issues. She felt she could adapt any exercise that may prove difficult. I then signed up.

Signing up and paying in advance provides motivation for attending classes

The first few classes were scary, I did feel people looked at me, and I stayed at the back. I was actually one of the younger members of the class, and from the back I could see that several other people had to adapt exercises as they had shoulder, neck or knee issues. There were some exercises, especially those linked with lifting legs I could do very easily and had to make harder, as I use my legs / feet to do so much.

The hardest thing I found actually was rolling my mat up – but I can now do this myself – it sort of rolls itself…..I find each hour goes very quickly and I now go twice a week to the class - Monday and Friday. The fact that the classes are in my diary and paid for, means that I don’t make the excuses as I would usually do for self–directed exercise, I attend and I do feel better after the class.

Pilates teacher tells Carolyn how she felt about teaching her

I asked my Alison how she felt about me starting her classes, and you might find her comments useful…….

“My advice for others is to find a clinical/therapeutic or beginners Pilates class, as they will be run either by a physio or someone with a bit more understanding about people's abilities.  My reasons for doing these classes was that patients had told me they had been to other classes and couldn't keep up, or found they were damaging.  95% of my attendees have 'problems' (including myself!), not as visible as yours so it is up to me to adapt exercises.  I occasionally feel I can't adapt something for you understandably, but just give you something different for you to do.  I hope there are other instructors out there that are as mindful of this.  Physios should be very used to this.
Initially I felt I was at risk of fussing round you, and I didn't want to draw more attention to you, but as you said you are very flexible!  Certainly, if people are focusing on what they are doing they shouldn't be looking round at other people anyway. I don't think I needed any more information from you before you started, it was good to meet you and have a quick assessment, but I do that with everyone. So again I would recommend people do that prior to joining a class and also either go and watch what goes on or have a taster session. Likewise, you don't want to be in a class for 'less-able' people as it probably wouldn't challenge you enough.” 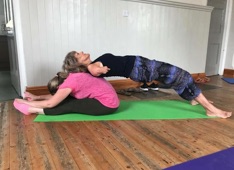 Carolyn has also taken up yoga

I have also taken up yoga run locally in my village. Once again, the class is mixed ability and everyone has some type of activity they need to do differently to be mindful of their bodies differences. The yoga coach is very aware and starts each element of the exercise with “If it is right for you...”

The things that have helped me to take up a class have been:

All I can say is give it a go – I haven’t lost weight by doing this exercise, but I am maintaining my flexibility, building core strength and maybe getting a bit more toned. I would be very happy to talk through with anyone who feels it may be useful for them about finding a class or questions to ask tutors etc. 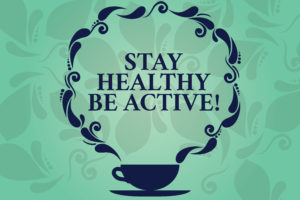