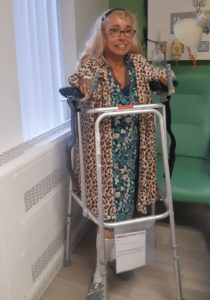 Mother of five, Lorraine Clucas, is always on the go.

Whether she’s looking after her nine grandchildren, volunteering at the University hospital in Preston, where she lives, or organising events from days out to dog walks; she is a very busy woman.

Lorraine’s active lifestyle became challenging in 2020 when she began to experience pain in her hip: -
“My partner, David, noticed that I was walking differently,” she recalls “But I said I was fine. Then I started getting twinges in my hip which got worse and worse.

By November 2020 I was in quite a lot of pain, so I contacted my GP who sent me for an x-ray. He diagnosed arthritis and prescribed co-codamol and naproxen to take away the pain.

They worked for a while, but the pain soon got worse, and I found it hard walking my dog.”

By early 2021 Lorraine was struggling to get in and out of her car.

“It was so painful,” she explains, “that I started being scared to get into the car. The pain in my right hip was excruciating. As my right leg is my dominant one, I worried about being able to use it. I do a lot of everyday things with that leg, given that I have short arms, so in March 2021 I decided to go for a private consultation at Fulwood Private Clinic.

My consultant looked at my original x-rays and told me I had ‘another good twelve months in that hip’.
‘Really?’ I asked, ‘It’s so painful I can’t sleep, whenever I turn over in bed, I’m in agony’. But he told me to increase my painkillers and carry on. Having paid £200 for a ten-minute consultation I was not happy – I felt like I was being brushed off.”

Things continued in the same way for a while, with Lorraine struggling on with daily pain.

“I was chatting to Doctor Dee at the Trust one day and told her about my experience at Fulwood Clinic. I told her I was in agony a lot of the time and taking a lot of medication" she says. "Getting upstairs was difficult and I was scared to come down them again because it would hurt so much.

Doctor Dee suggested I talk to an orthopaedic surgeon, but I insisted I was fine because my consultant had told me so.

But I wasn’t fine, I could hear my hip clicking when I walked, and after a disastrous day out with friends where I could hardly walk, I went back to her and decided to get that second opinion.”

A second opinion confirmed an operation was needed

Lorraine was referred to Dr Gambhir, a lower limb specialist at Wrightington hospital in August 2021.

“I didn’t take any medication on the day I was due to see him,” Lorraine says. “I wanted him to see the real me. As I entered his consulting room I was having trouble keeping pace with the nurse. He was so shocked he sent me straight for another x-ray.”

“Dr Gambhir explained that I had hip dysplasia and needed a hip replacement as soon as possible. The joint had deteriorated to the point where it was bone-on-bone,” she says. “He explained that I had very small bones due to thalidomide, so they got even more worn than most people’s, especially as I was using my right hip so much.   He said that he could operate on me through the NHS but that it would take 12 months to get an appointment, so I spoke to the Trust and they supported an application to the Grunenthal Foundation for a grant to pay for the surgery. Soon after, I received a letter giving me a date of 30 October 2021 for my hip op.”

Naturally, Lorraine felt anxious about her upcoming surgery. She was scared that she would lose her independence in the short term and might not get it back in the same way.

“At my pre-op appointment my fears got worse” she remembers. “It took them two hours to get the blood they needed to test before my surgery. Eventually the anaesthetist came and calmed me down, using warm flannels on my hands and feet to make the process easier. He told me that he would be my anaesthetist on the day of my surgery – 16 October – fourteen days earlier than I had been expecting. I was terrified.”

With less time than she had hoped for to prepare for her hip replacement, Lorraine was lucky enough to get support from other beneficiaries who had had the operation.

“They told me how to plan ahead to make life easier post-surgery,” she says. “Helpful tips like wearing dresses rather than trousers and making sure that everything I needed was downstairs. I would never have thought of all that.”

Support from beneficiaries helped Lorraine through her recovery

Post op, Lorraine’s anxiety was at boiling point; –
“I thought ‘there goes my independence, out of the window’” she says “I really struggled getting up one small step into my house. Sitting up without help was impossible, I couldn’t pull my blankets up myself and it was agonising just to sit on the loo! I had to borrow a commode from my mum.”

Lorraine was provided with a special walking frame, adapted for her short arms. She spent three and a half weeks indoors and had to sleep on her back for six weeks, lying flat, but she regained vital inches in height, returning from four feet nine inches to the four feet eleven inches she had been before her troubles began. This video shows Lorraine walking with her frame.

“The recovery phase had a massive impact” says Lorraine. “I don’t know what I would have done without the support of other beneficiaries who’d been through it. I was on morphine and had to inject my stomach every day to stop my blood clotting, but I set my mind to getting better.

When physiotherapy began, I was walking with my right foot turned inwards – the approach I’d taken before my op to compensate for the pain. I had to readjust my mindset to walk with my foot turned out and my body upright – but I got there.”

“That may be due to my experience with thalidomide” she says. “It’s like fight or flight – get on with it or give in – so I got on with it.”

Gradually, Lorraine’s pain began to lessen and after two months she stopped taking her medication. After three months she felt sore but had no pain.

It is now almost six months since her operation and her life has totally changed. Her video shows how successful her recovery has been.

“It’s amazing!”, she exclaims “I’ve gone from being scared to get into the car to zipping in and out without thinking about it and walking my dog one and a half miles a day. I can’t believe I left it so long to get a second opinion. It was so worth it to stop being in constant pain and filling my body with strong medication. We had nearly invested in a stair lift for me, at a cost of £5,000. But don’t need it now and any arthritis I had has gone.”

“I tell everyone I can about the benefits. I give talks at the University to tell medical and social care students about my various experiences and how things can be improved for people with disabilities undergoing surgery. If any other beneficiaries are dithering about having a hip replacement, I would recommend it to them in a heartbeat. It’s absolutely changed my life.”