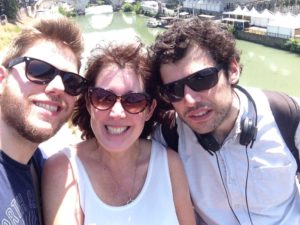 Originally from South Wales she is divorced with three grown up children and has a great life in Harrogate, enjoying walking, theatre and cinema.

Pam has been short sighted since the age of five and was one of those children with NHS specs – branching out into other glasses and contact lenses as she got older.

Then, last year, she decided she was tired of faffing about with bi-focals, varifocals and taking numerous pairs of glasses on holiday. Putting glasses on and taking them off could also be problematic as Pam has upper limb impairments – one short arm minus a thumb and one full length arm with restricted hand and shoulder movement.  Enough was enough and she opted for lens replacement surgery.

“It wasn’t a vanity thing” she explains “I was used to wearing glasses and contact lenses. A couple of my friends had had lens replacement, and found life without glasses much easier, so I thought, why not?

I knew I couldn’t get it on the NHS so decided to put my Health Grant to positive use and go private.

I’m not sure if my eyesight has anything to do with the effects of Thalidomide but my vision had deteriorated over the years so something definitely needed to be done.”

A work colleague of Pam’s recommended Optimax, which had a branch in Leeds, and Pam decided to go for a consultation;

“I spoke to someone who had used another company to have it done,” she says, “but trusted my colleague’s recommendation and went with Optimax.

Planning for the operation

At the initial consultation, they put drops in my eyes to dilate my pupils so that they could look at the back of my eyes, but otherwise it was just like a normal sight test.

They explained the procedure and the risks and encouraged me to do my own research before giving me a date. I read up on what happens quite a lot and knew what to expect, and as it was only a ten minute operation I thought ‘I can deal with that’.”

Pam planned for her surgery carefully; “You have one eye done one week, and the other the next,” she explains “and you might not be able to drive for a while afterwards. So I had to plan two weeks annual leave from work, and make sure I had someone to stay with me on the night after my surgery. I also needed to arrange for someone to look after my dogs!”

Pam continued to wear glasses and contact lenses for restricted periods, right up until her surgery date. With all the preparations to do, she didn’t really have time to be nervous, and three months after her consultation, went for surgery in Huddersfield.

“To be honest, it’s not the most pleasant of experiences,” Pam recalls, “You have a local anaesthetic in your eye and it is held open with a clamp. You’re told to close your other eye and it’s quite difficult to do so without closing both of them!

Your lens is contained within a capsule in your eye, so they cut into that and break up the lens, suck it out and then replace it with the new one.

What I wasn’t expecting was that, even though they had taken the lens out, I could see a bright light with the eye they were working on. It was really weird.

I’m told that’s because you have nerves on your retina which still perceive light without the lens.

The process wasn’t at all painful but it is a bit strange – if it had been longer than ten minutes I might have found it harder. Afterwards, I had to go home and lie in a dark room, taking drops every two hours.”

On the second day after surgery, Pam had to go for a check up in Leeds, to make sure the eye was healing well, and everything was ok;

“I had to take antibiotic drops and steroid drops to help the healing process and had to wear sunglasses, and go without make-up or any creams on my face,” Pam says. “They told me my vision was fine for driving but my brain couldn’t adjust to having one eye corrected and not the other. So I didn’t drive until after my second eye had been done.”

Two or three days after surgery Pam could return to normal but found it quite difficult and frustrating;

“I couldn’t wear glasses because both eyes weren’t the same,” she remembers, “and I couldn’t put one contact lens in the eye that hadn’t been operated on. It was a bit limiting – you definitely need that time off work in between surgery. I listened to a lot of audio books!”

A week later Pam went through the whole process again with the other eye;

“It wasn’t so difficult the second time” she says, “I knew what to expect.”

Pam's surgery has changed her life 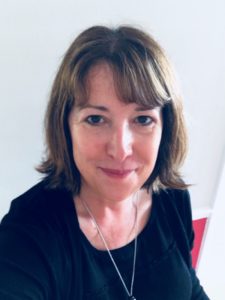 She no longer has to worry about taking lots of pairs of glasses out with her, or away on holiday and only wears glasses with very fine lenses for driving, and sometimes at the cinema.

“When you have your lenses replaced they guarantee that your sight will be up to driving standard.” Pam explains, “One of mine was very slightly under and I will have it corrected with laser surgery. Most people have perfect 20/20 vision straight away.”

Lens replacement enables people to see well without further surgery, but is subject to deterioration with age. Pam’s surgery cost her £6,000 which she thinks was well worth spending.

“I had it done a year ago now”, she says, “and I often forget I ever wore glasses! 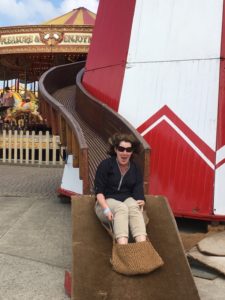 I wouldn’t do anything differently if I was going for lens replacement again. It’s the same operation people have for cataracts and it’s simple and safe.”

When asked if she has any advice for other beneficiaries considering the same operation Pam says preparation is the key.  “Make sure you’re completely aware of the process, so there are no surprises,” she suggests, “I wished I’d known about the fact that I’d see a bright light when my eye had no lens – I wouldn’t have been so freaked out by it! So make sure you read up on what happens, first.”

If you’d like to know more about alternatives to wearing glasses you can get more information here.