Some of you might know me – I am originally from Northern Ireland but I live in Limerick now and work for the Health Services in Ireland, as a voice for people with disabilities and older people who receive services funded or partially funded by the health services.

On Friday 25th January I was going across to the hospital (across the road from my office), to get a diet coke for my break. I pushed the button, and when the green man came up I began crossing the road. I looked to my right and the immediate thought was “that car is not slowing or stopping”. Then the car hit me – I felt the impact of it hitting the right side of my wheelchair. I was then catapulted out of the chair and the last thing I remember was my head hitting the road.

When I came to I was being taken out of an ambulance at the hospital I was just hit outside of. I was taken to resuscitation unit – where over the next several hours I was x-rayed, ct scanned and MRI’d from head to toe.

I was very grateful that after breast cancer 5 years ago I had opted to keep the port-a-cath in my chest. This meant time was not wasted looking for non-existent veins and they were able to access it quickly.

For those of you who don’t know me I have fairly short arms, and really short legs. 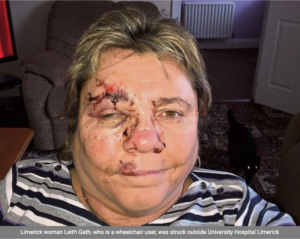 When all of the results came back the doctors were able to tell me that I had not only gotten 15 stitches above my eye, but also had received a fractured nose and broken two small bones at the front right side of my pelvis. I had not actually broken a bone in my neck as was first suspected – turns out that was thalidomide degeneration damage.

Almost 6 weeks on I am only now regaining my independence of taking myself to the bathroom. I still need help to shower (was able to do this independently before and hopefully will again). And I am still sleeping on the recliner because it is way too painful to lie in the bed yet – but sincerely hope this will come back in a short space of time.

I am very excited that, as I can now drive and toilet myself independently, I am back at work full-time from next Monday (although I have been popping in and doing some from home over the past 2 weeks or so).

So slowly life is returning to normal. Yes, I still have pain – but hey – who out of all of us doesn’t? It’s now back at an endurable level. 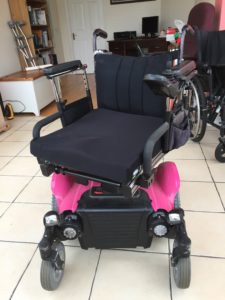 My poor Permobil wheelchair, however, was not so fortunate. It was written off but most certainly saved me from being killed or more serious injury. The poor chair, however, was bent and twisted and the backpack I had on the back was even torn in the accident.

And this story gives a whole new slant on diet coke being bad for your health.

This was the second time in her life that Leigh had been run over whilst crossing the road in her wheelchair! The first time was whilst she was living in Texas. If you’d like to learn more about Leigh’s eventful and exciting life, you might want to consider purchasing her autobiography:

Don’t Tell Me I Can’t: How One Thalidomide Survivor Turned Adversity into Triumph by Leigh Gath
The triumphant story of a thalidomide survivor
ISBN-10: 1480162000 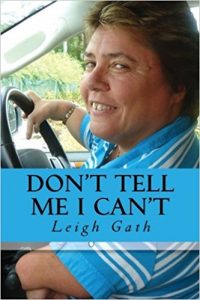