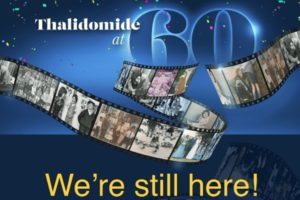 In Focus: Read about the celebrations held for The Thalidomide Society's 60th anniversary

Putting the sparkle into the Jubilee

This year may well be the Queen‘s platinum jubilee, but for some of us an even more important jubilee is being celebrated: the Thalidomide Society was founded by the parents of thalidomide survivors 60 years ago.

Having already celebrated our golden jubilee in 2012 – spectacularly pulled off by the late, great Louise Medus-Mansell – we knew that the bar had been set very high.

The event at the Heathrow Marriott felt like a great coming together after all of the lockdowns and restrictions – a real reason to celebrate being together.  Call the Midwife, Mat Fraser as compère, presentations about oral history and the latest thalidomide research as well as our collaboration with the Science Museum were high on the agenda.

We remembered those of us who are no longer here – a respectful and sobering moment – and we heard from thalidomide associations around the world who wished us well.

Our new patron, Baroness Jane Campbell, came and spoke to us all and stayed for dinner.  Tina Brown, the widow of our late patron, Sir Harry Evans, gave us an interview by Zoom and has subsequently accepted our invitation to replace Sir Harry and is now a second patron of the Society.

A fabulous event enjoyed by all

There was a film show running all day in a separate room – among the highlights, Attacking the Devil and Niko Von Glassow‘s brilliantly self-deprecating film, Nobody‘s Perfect.

There was a craft stall that did brisk business, selling items made and donated by our members, Gerry Freeman made a commemorative quilt which fetched £1,000 by silent auction, and the Kate Rennie Thalidomide @50 portraits were once more on display, much to the delight of many.

In the evening, honorary Trustee and founding member, Margaret Hogg proposed a toast to all of us. We had a fabulous dinner in the beautifully decorated dining room (thanks again Gerry) and were entertained by poets, magicians, an improv band and the obligatory seventies and eighties disco.

The next day, people looked tired but incredibly happy: the number of people who came to say  ‘well done‘ and ’fabulous event‘ was a joy to hear.

Let’s hope that in ten years‘ time, we too will be going platinum.