Auditory technology is coming on leaps and bounds in today’s world.

Beneficiary Phil Williams tells how, with the help of his Health Grant, he made a life-changing decision that everyone will want to hear.

“As well as being born with upper limb impairment I was profoundly deaf in both ears, with the outer structure of my right ear missing.

When I was three, I spent around nine months in hospital having reconstructive and plastic surgery to move my right inner ear and rebuild it. This involved a skin graft, where a patch was taken from by bottom - so I always have a little smile to myself when anyone kisses my right cheek. I still have a little white square on my bottom, but I’ll spare you a photo of that!

As a result of the op I got 55% hearing in my right ear and 45% in my left, which was marvellous; and through a combination of coping strategies, including lip reading and trying to sit at the end of tables so that everyone is on my right, I’ve always managed.

A few years ago, I had to accept I was really struggling, particularly when there was a lot of background noise, like in a pub or restaurant, or in larger boardrooms at Trust, National Advisory Council or other meetings. It was affecting my social and professional life, but I’m really bad with health issues and tend to wait until something is critical before I seek help. A typical man, in other words.

My wife and I like watching dialogue-based TV shows and I increasingly found that I needed the volume quite high; my daughters used to come downstairs saying they couldn’t sleep.

As a brilliant, short term, solution I bought a set of wireless headphones that allow you to set the TV volume to suit you, whilst anyone else in the room can have it at a volume to suit them. My family could also wear them with the TV on mute without disturbing anyone else in the lounge; but we soon realised that wearing them was quite isolating.

I finally went to my GP for a hearing check and my hearing had definitely worsened significantly. Some of this was due to the normal ageing process but, as I was starting from such a low base, the impact was quite debilitating. I was referred to Exeter Hospital hearing clinic.

Each visit meant a 90-minute round trip and the usual parking issues; plus a wait of around three hours when you got there. It was really frustrating.
The final advice was to have a BAHA (bone anchored hearing aid) system in one ear; and I was pretty unhappy as I didn’t want an operation. My upper limb impairment would also have made it a real struggle screwing it in place and unscrewing it for showers, swimming and sleeping; they then talked about inserting a magnetic plate under the skin instead of a protruding screw thread.

The NHS would only do the one ear so I suggested having both ears done at the same time with me paying for ear number two. I was told that this was impossible and that they wouldn’t know how much to charge me, which, as an accountant, I found rather startling! How on earth do they budget? 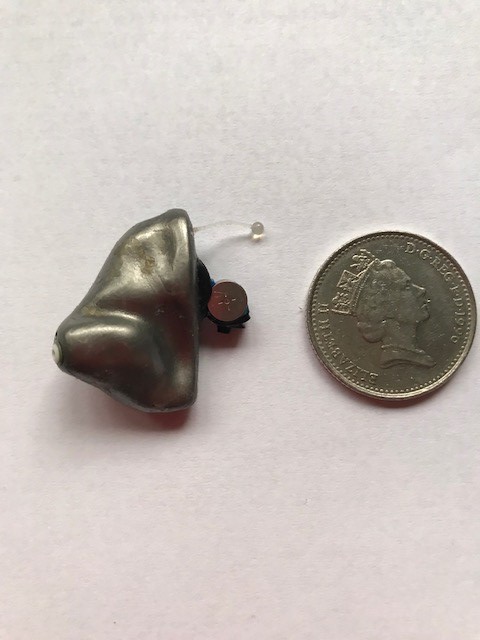 The final nail in the coffin was the size of the unit. I like to wear my hair short for sport and stuff, and have no ear lobe on one side, and a tiny one the other. The size meant that the unit wouldn’t be concealed on the side of my head. I would look like Frankenstein’s Monster, truth be told. I said I’d pass and carry on coping.

I spoke to Mark Spofforth (one of the trustees) at the next trustees meeting who told me about some of the options and advised me to go private. As a Welsh, working-class boy, that was a slight anathema to me and I had never considered it, but I booked at a private clinic in Exeter - Audify Ltd.

Wow! What an exemplary service. I arrived five minutes before my allotted time, with ample parking, and entered a smart reception to be offered a proper coffee; latte, thank you very much.

I sat down and pulled out my iPad ready for a long wait but was seen exactly on time. The examination and testing process were excellent, and I think the consultant, Sam Palmer, really enjoyed it as something quite different to his usual cases. He was imaginative, empathetic and creative. Offered several solutions, I opted for an in-ear, digital, titanium aid in my left ear; custom made and moulded with a longer wire so I could access it independently.

The day I received the hearing aid was scary, but hilarious. I sat in the chair and he inserted it the first time then popped to reception. I was sitting on a swivel chair and thought ‘what’s that sound?’ I realised I could hear the seat squeaking then my feet rubbing on the carpet.

Then I heard Sam talking to the receptionist outside.

My hearing wasn’t simply restored; it was actually better than it had ever, ever been in my entire life! Amazing.

He offered to turn down the volume, but I preferred to have a maximum setting, initially. When I got in the car to drive away, I could hear the keys jangling and the indicators for the first time. I was hearing so many sounds that many of you can hear and simply tune out. It took me many months to adjust.

My daughters aren’t sure they like me being able to hear them plotting, planning and whispering! On my next train trip to London, I was trying to concentrate and work but, about three rows away, two young ladies were chatting excitedly about organising a hen weekend in Ibiza for £300 per person. It was entertaining, but incredibly distracting!

My home, social and professional life has improved immeasurably. I went to Rome on an annual rugby trip with a regular group of twelve, watching Wales - we usually alternate between Dublin and Paris - and on arrival at a restaurant went straight to the bathroom.

When I got to the table, the boys had left the usual seat on the end with everyone else on my right, but I no longer needed it. It was awesome. I can hear clearly (sometimes too clearly) in social situations and at meetings.

Getting my hearing aid wasn’t cheap. All in all, including a two-year contract for regular check-ups, wax clearing, free batteries and so on I paid £2,200; but it was money well spent – invaluable, in fact.

With my wife and two younger children to consider I might not have taken this option; but having access to the Health Grant made the decision incredibly easy.

Whatever health issues you may be having, please don’t put things off, or be as blinkered as I was about going to your GP or a private clinic, if the NHS can’t meet your individual unique needs. The Trust’s Health and Wellbeing Team can signpost you to relevant and appropriate support; whether it’s hearing aids or any other adaptations, equipment or procedures."

If you are interested in Phil’s story and would like to contact him, you can message him via the NAC page. Or for any further information about hearing loss and hearing aids you can contact the H&W team at the Trust.