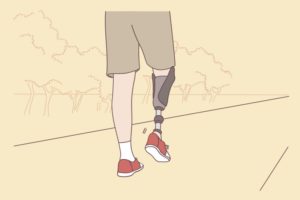 Mark Hillier sees himself as quite a lucky man.

Hailing from the Welsh, market town of Crickhowell, he has managed well with his prosthetic leg over the years and been as independent as he can.

At home with his wife, who is still working for the NHS, he restores old motorcycles in his workshop, works on the garden and sees his grown up children, without thinking much about his leg; and it’s hardly surprising as it has been his companion, in many guises since he was a tiny child.

“I’ve always been strong willed” Mark laughs, “reluctant to ask for help, and keen to prove people wrong! When they say I can’t do something, it’s like a red rag to a bull!”

But even Mark has his limits and, like all of us, is getting older.

“Joint pain is more intense now,” he says “and I may have carpel tunnel syndrome in my left hand. The doctors are checking it out at the moment.”

In terms of the effects of thalidomide he sees himself as ‘one of the lucky ones’ – short of stature, with shorter arms (with elbow joints and limited wrist movement) he has an artificial right leg, and, like many thalidomiders, some hearing problems.

Mark has had an artificial limb since he was 12 months old, when he got his first ‘rocker’, two metal strips attached to his stump, and with a strap around the waist.

“They said I’d probably never be able to walk,” he reflects, “but my mum said ‘No, he’ll walk. Give us the leg and we’ll sort out the walking’ – fair play to her.

And I did walk! I went to normal school and have led a normal life ever since.”

Nowadays, Mark’s leg could be seen as something of a museum piece.

An aluminium prosthesis, first designed in the First World War, it is attached round his waist with a leather belt, and has a leather strap which operates the knee, working with elastic which moves up the limb and is buckled at the top. The looser the buckle, the more swing you get in the leg. The limb ends in a wooden foot.

The leg is handmade by craftsmen, who hammer the aluminium socket to fit the shape of my stump – perfectly, and is held in place by a leather strap around my waist. It’s made for me – not from a plastic, off- the –shelf mould. These days it’s more of ‘one size fits all’.”

As Mark gives his leg such a hard time, it has been through several revamps – every nine months when he was still working and busy and less often now. He always has a spare waiting in the wings.

“I’m under Rookwood Hospital and Rehabilitation Centre in Cardiff,” he explains “and I’ve had one or two limb-fitters in my time! I’ve known Ian Massey, my current limb-fitter since I was a teenager and he was an apprentice fitter – he’s one of the best.

There are even lady limb-fitters these days – that’s how much it’s come on!

They know me so well, at Rookwood. They’ve worked with my leg in all its different stages. I’m lucky in that my weight hasn’t altered so they haven’t had to had to adjust the socket much.”

Mark’s great relationship with his limb-fitter has resulted in some great team work: -

“I don’t ask for much,” he chuckles, “mine is very much an economy limb; but a couple of years ago, the wooden foot that came with my leg went out of manufacture. It was extinct!

The only feet available were the modern, moulded rubber ones that fit the more modern prosthesis and won’t fit my leg.

I come from an engineering background and I said to Ian ‘I reckon if we cut off the bottom of my leg, and fit it with the modern, telescopic shin, the modern foot will fit.’

Ian said he had been thinking exactly the same – and it worked!”

103 years after his metal, riveted leg was first designed, Mark is still getting the most from it.

“I even swim with it on holiday,” he laughs, “the fitters really don’t like that!”

He is adamant that, if you’re happy with the older style limbs, especially at this time in your life, you should stick with them.

“We’re too old now, in our sixties to get to grips with the new ones. You have to be pretty active and confident. A friend of mine has the soft tissue legs and does little walking now, relying on his wheel chair, as he couldn’t get on with them. I used the carbon fibre ones briefly when I was working and my leg broke within half an hour of reaching work!

These days I sometimes need a stick for walking on grass, but otherwise I’m fine.”

Find out more about prosthetics 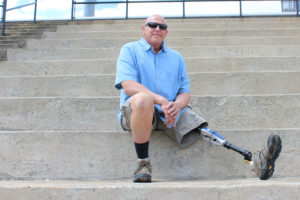 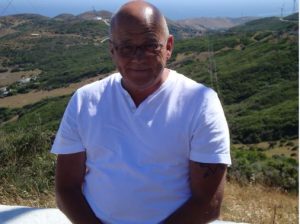