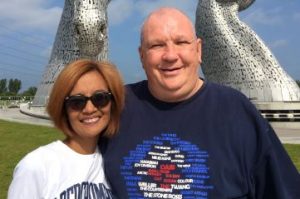 54 year-old Billy Burton is no stranger to the operating theatre. He has had five operations in nine years to counter the effects of Thalidomide and the pain it has caused him. Billy is up-beat and positive about his sessions on the operating table as they’ve made such a difference to his life, and he wants other beneficiaries to feel positive about surgery too. Here’s his story about total shoulder replacement surgery, which he underwent in June 2017.

“My arms are shortened from the elbows down, with club hands and four fingers on each hand. In the not too distant past I had full function in both hands – so I could do things like reach down to get my wallet out of my back pocket – pretty important stuff!
Over time use of my right hand became minimal but I managed with my left and, being left-handed, that was ok. Then, before my shoulder surgery, I got pain in my left shoulder joint, down the back of my arm and across my shoulder to my neck. This was serious, I couldn’t rely on my left hand so much and it was becoming increasingly difficult to manage everyday tasks. On a scale of one to ten, the level of pain was from seven to eight; but it was getting worse.
I live alone so there was no way I could stop doing the basics for myself at home. Reaching up into kitchen cupboards was particularly difficult; and at the other end of the scale getting down to and reaching into under-counter cupboards was also a major challenge. Lifting a kettle and filling it with water became hard work and other things like getting dressed and undressed and pulling the duvet over myself when in bed. I had to alter the way I was doing things to minimise the pain, and got a cleaner to take care of the house and a gardener for outside jobs. A friend of mine does all the odd jobs now, and I wear clothes without buttons or zippers; I also eat Wiltshire Farm Foods ready meals to save on cooking.”

“The medical professionals I worked with explained that the pain I was experiencing was caused by glenoid dysplasia and glenohumeral arthritis in my shoulder. In simple terms this means the shoulder hadn’t developed properly when I was born and the shoulder had worn out earlier than normal.
To manage it I used paracetamol, ibuprofen, and dihydrocodeine, and after surgery, I just carried on with these. My doctor advised me to cut down and try a more holistic approach - exercises to build up the muscle and other options. I chose yoga but I found getting into the yoga position just caused more pain."

"When the pain was getting worse and worse I knew it was time to ask the Thalidomide Trust for help."

“A number of options were put to me. The first consultant I saw was very interested in operating on my right hand to improve the way the hand could do small movements such as gripping, rather than focusing on the left shoulder problems. To help the shoulder he gave me three steroid injections to relieve the pain, two of which were successful and reduced the pain for two or three months; but the original problem was still there.
I was then referred to Mr Simon Lambert, one of the leading shoulder surgeons in the world.
He originally worked at the Royal National Orthopaedic Hospital (RNOH), under the Shoulder Team, where quite a few from the Trust have been referred. However, whilst I was seeing him he moved to be head consultant of the team at The University College Hospital, London and I chose to continue seeing him.
Mr Lambert and his team were very professional and thorough and I felt reassured and in safe hands. They knew from my MRI results what surgical procedure and what implant were needed and were very forthright and honest about the procedures, the risks and the advantages of successful surgery.
Mr Lambert stopped the steroid injections I’d been having in readiness for surgery – as steroid injections shouldn’t be given in the 3 months before surgery to ensure that the shoulder muscle can be as strong as possible to accommodate the new shoulder joint, post surgery.
Before my surgery I had some physio on my hips, spine, knees and shoulders. The regular movement of my shoulder joint really helped and I still do the exercises to keep my recovery on track and look after those creaking joints!
My operation was my fifth in nine years and, where I had previously been nervous and apprehensive, Mr Lambert’s professional, confident and calm manner helped me feel much more at ease.
Mr. Lambert and the team decided that they would shave away any arthritic growth or spurs that were causing me pain and then implant a new ‘off the shelf’ shoulder. This involved lining the shoulder cup with ceramic and replacing the ball joint with a plastic one.”

“I was told that it would be about 12 weeks before I got full function in my shoulder post surgery, but as early as two weeks in, I could tell the arthritis was gone and there was no more pain. It was just a case of the wound healing.
I could feel my functions coming back very quickly and saw improvements on a daily basis. With fantastic support from the Physiotherapy team at my local hospital I made steady progress. I was driving after eight weeks but still feeling pain if I moved my arm into an unusual position.
After 12 weeks I now have full function again. The wound is still healing, though, and can be painful if I over exert myself.
My physiotherapist has advised me that I may still feel painful twinges 6-12 months after surgery.”

“ Since surgery I have been to one follow-up appointment (after one month) which showed that the operation had been a complete success. The implant (which is held in place by tendons and muscle, rather than screws) was still in place and my range of movement was excellent. My second follow up appointment is in a few weeks time.
I am absolutely delighted about the results and strongly urge beneficiaries with the same symptoms to get in touch with the health and well-being team at the Trust and, if they have the opportunity, to consult with an expert shoulder team, recommended by the Trust, as I did. The Trust are able to keep up with beneficiaries’ experiences and advise you who best to see at the time you need help. I didn’t mind traveling to ensure I saw the best person possible, but the Trust can help you find an expert more locally if you prefer.
University College Hospital is a new Hospital where you are very well looked after. Sadly there is no accommodation for relatives in the hospital grounds, but there are lots of hotels nearby and cheap accommodation offered by the hospital which is safe and secure and mainly used by medical students and hospital staff.
I had spinal surgery last year at the RNOH which was a lot riskier than shoulder surgery but much less physically traumatic. Even if you recover well from shoulder surgery it really does take 12 weeks before you can function properly and you will need someone with you to look after you on a full time basis. On the whole, it was well worth it and the hardships I experienced during the healing period are becoming a thing of the past as I start to get my strength and movement back."

"Getting rid of the pain in my shoulder has made all the difference so I’d definitely tell other beneficiaries to look after themselves and get the treatment they need!”

Read Billy's other story about his successful neck surgery.